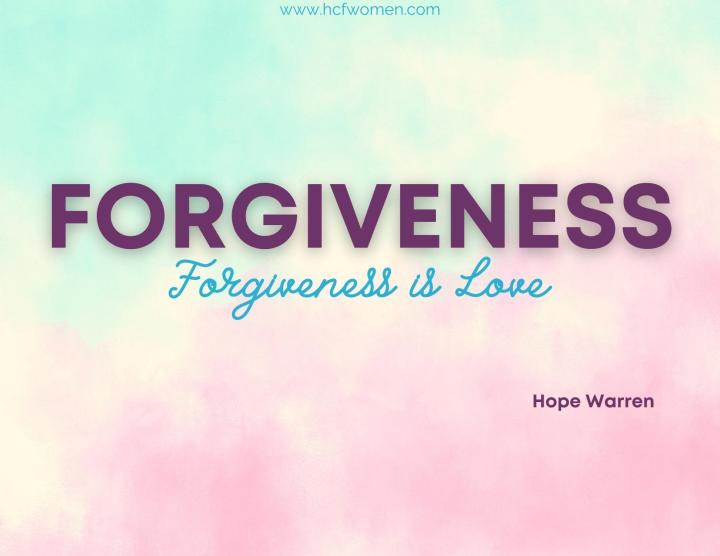 Editor’s note: For the month of January we will be sharing our top blogs from the year of 2022. We hope you enjoy the recap as we begin the year of 2023!

Forgiveness-the action or process of forgiving or being forgiven. Or I prefer forgiveness-love with a big helping of grace and mercy. It’s something we all experience one way or the other. About 8 years ago, I learned what true forgiveness was and how it frees you and changes your life.

Without going into the messy details, I had to confess to my husband that I had committed adultery and because of that, I had also lost my job. I will give a little bit of background to what brought me to this point in my life. I had accepted Christ as a teenager, but never really believed that I was worthy of all He offered. I didn’t know who I was in Christ, or how much love He had for me.  I was under the assumption that if I was saved, I wouldn’t be tempted to fall into the trap of lies and sin the evil one throws at us.  Through a series of events a couple of years prior to my admission, those lies and temptations came in huge waves. The evil one knows exactly how to attack and he did just that!. I began a downward slide into lies, deception, and false identity. The farther I slid, the faster my slide became until I hit rock bottom.

I came home one Friday afternoon and waited for Don to come home. I confessed what I had done and that I had lost my job. Let’s just say it was not pretty. After several questions, comments, and accusations, he had me pack my stuff up and he took me to my mother. He was done. It was over. The evil one had destroyed another marriage, so he thought. But God…

Shortly after accepting Christ, I discovered Romans 8:28 that says,  “And we know that God causes ALL THINGS to work together for the good of those who love God and are called according to His purpose for them.” (Emphasis added) That became my favorite verse and one I held onto. And it’s a good thing because that verse became so real for me.

The first act of forgiveness came from my mother. Although she was very hurt by my actions, she took me in. I know it was hard for her because, when I was 8 years old, my parents divorced because my father had an affair. She had to look past the hurt and resentment of that generational curse to see her child, her child that was lost, confused, scared, and alone. The second act of forgiveness came from 3 dear friends and my sister-in-law. They were all disappointed and confused. I had become very good at hiding all my secrets and lies. These four friends could have decided to look at me with judgment and disdain but instead decided to extend grace and mercy. But the biggest act of forgiveness came from my husband.

After Don returned home from taking me to my mother, he called our daughters, and he called his family. Our daughters came home to be with Don. Mary, our youngest, came to see me that evening. To say she was upset was a huge understatement. In her honest way, she laid into me and let me know how disappointed and hurt she was. Becky, my logical daughter, knew she needed time to process what she was thinking and feeling. She came the next day. She was very hurt, but she came with grace and mercy. During that Friday night and most of the next day, Don searched his heart. Several members of his family came on Saturday to support him and the girls. They prayed for Don, our girls, me, and our marriage. Don came the next day to talk to me. He realized he would need me to help him get through all this and realized that what God had joined together, no one would tear apart. He took me home. When we got there his family was there. Instead of anyone looking at me with judgment, they surrounded me in a prayer circle. It was not easy for us, but with prayer, love, mercy, grace, a good Christian counselor, and many hours of talking and growth, we are better than ever before.

Forgiveness doesn’t come easy. Was it easy for Christ to forgive the disciples who chose sleep over praying for Him in the garden? (Mark 14:32-42) Or the ones who called for His death? (Mark 15:13-14). Judas, one of Jesus’ disciples,  sold Jesus out for 30 pieces of silver. (Matthew 26:14-16). Another disciple, Peter, denied Christ 3 times after saying that would never happen (Matt 26:69-75). But Jesus forgave these disciples just like He forgave me.

I recently read a devotional about the woman caught in the act of adultery (John 8:1-11). A sentence from that devotion really stood out to me. “God’s forgiving grace is greater than all of our sins.” He forgives us when we confess and ask for His forgiveness.

But, what about us? Do we forgive easily when we are wronged? Do we sit in judgment? Do we allow those who have been caught in sin be forgiven? Or do we want to stone that person? And when we are the ones who need forgiveness, do we truly accept it? When Peter denied Christ 3 times, did he hold on to that shame? I think not. Scripture tells us he wept bitterly. What it doesn’t tell us is that I think he asked for forgiveness. Mark 16:7 tells us the angel of the Lord told the women who had gone to the tomb to “go and tell his disciples, including Peter, that Jesus is going ahead of you to Galilee.” If Peter had not asked for and received forgiveness, he would not have been told to “feed my sheep” (John 21: 15-17). By the way, Jesus asked Peter 3 times if he loved him, and 3 times Peter said yes. 3 denials, 3 moments of grace and mercy.

And what about Judas? When he realized what he had done he didn’t ask for forgiveness. Instead, he hung himself. What if…what if, he too, had asked for forgiveness? I can’t help but wonder what his life would have been like. Maybe he would have had an even greater testimony of forgiveness than anyone.

Forgiveness is hard. It’s hard to extend to others when we are hurt. It’s hard to point out the need to forgive or to ask someone for forgiveness. It’s hard to forgive ourselves when we have hurt those we love the most. I know, personally, I had a hard time forgiving myself. I still have times of regret remembering the pain I caused my family and friends. But I have been forgiven by them. I forgive myself. But most importantly, I have been forgiven by my Heavenly Father.